- one island among thousands -

250 kilometers north of the Arctic Circle lies Aasiaat on the 62° latitude. During winter the temperature sometimes drop to 35°C below zero although it feels different because of the dry air. Read more below.

Click the button to the left for more detailed graphs on the weather in Aasiaat.

The climate of the Greenland and Aasiaat is characterized by long, cold winters and short, cool summers. There is a large amount of variability in climate across the Greenland, but all regions experience extremes of solar radiation in both summer and winter which causes the spectacular phenomenon northern lights. In Aasiaat it is visible from October and until March. Greenland experience autumn and spring although they are short but very dramatic seasons.

The air quality in Greenland is among the best in the world due to it’s geographical position in the high north. Due to the low level of moisture in the air the line of sight is also increased a lot. From Aasiaat you can see the Disko Island which is located 70 kilometers away.

Another interesting fact about the dry air is that temperatures doesn’t affect you in the same way as you might be used to. Minus 10°C in Denmark would feel like 0°C in Greenland.

Archaeological projects in the region have suggested human habitation in the region that includes Aasiaat as far back as the 5th millennium BC. The earliest modern settlers dated to around 1200; these were probably subsistence hunters.

Check it out here

We specialize in arranging a pleasant A-Z experience for anyone who visits Aasiaat. We can help you to dive into your travel without a care. Your visit should be successful, no matter what you aim for.

Our experiences varies from action packed snowmobile racing to cultural tours around the town. We look very much forward to seeing you here with us.

Wonder how to get here?

The winter in Aasiaat is as arctic as you get it. The ocean surrounding Aasiaat is usually frozen which in itself is a spectacular sight.

Summertime is colortime. Birds are singing, flowers are decorating the ground and seal, whale and fishes fills the sea.

In Greenland the consequences of global warming are very evident. In Aasiaat you’ll know it as soon as you speak to one of the local fishermen: The fishes are vanishing.

Because of the extremely low humidity, cold doesn’t affect you the same way as E.G. in Scandinavia. So minus 20°C in Aasiaat feels like minus 40°C in Norway.

In prehistoric times, Greenland was home to several successive Paleo-Eskimo cultures known today primarily through archaeological finds. The earliest entry of the Paleo-Eskimo into Greenland is thought to have occurred about 2500 BC. From around 2500 BC to 800 BC, southern and western Greenland were inhabited by the Saqqaq culture. Most finds of Saqqaq-period archaeological remains have been around Disko Bay, including the site of Saqqaq, after which the culture is named.

From 2400 BC to 1300 BC, the Independence I culture existed in northern Greenland. It was a part of the Arctic small tool tradition. Towns, including Deltaterrasserne, started to appear. 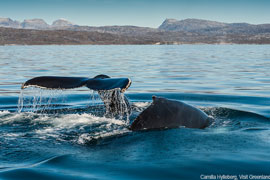 See the giants in their natural habitat 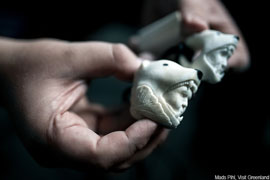 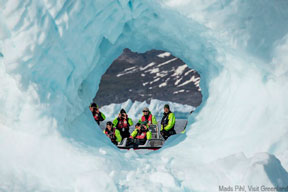